Google, what the (bleep) are you doing?

Google announced its new privacy policy last week – it was immediately met with Congressional concern, fire and brimstone from privacy advocates and some good old fashioned ribbing on Twitter from none other than Steve Martin (yeah, THE wild and crazy guy). This was just another dark cloud in a growing storm of concern regarding the Mountain View search giant.

Take Google’s recently released 4th quarter earnings report, released on January 19th, which was a major disappointment to investors. What was supposed to be one of their most prosperous quarters ever fell far short of estimates due to an 8% decrease in the average cost per click for an Adwords ad.

Making it worse, this news followed two high profile “incidents” which certainly put into doubt Google’s dedication to their well-known mantra of “Do No Evil”.

Paul Newman knows a good Sting when he sees one.

While it might not be seen as a move of pure evil genius, being implicated in a client poaching scandal in Kenya certainly isn’t going to put you on anybody’s list of good doers. Mocality, the Kenya based local search directory that caught Google red handed in a carefully executed sting Paul Newman’s Henry Gondorff would be proud of, exposed Google for scraping their database of Kenyan businesses while flat out lying about their relationship when contacting those businesses.

Google in a statement released on January 13, 2012 stated they were “mortified to learn that a team of people working on a Google project improperly used Mocality’s data and misrepresented our relationship with Mocality to encourage customers to create new websites.”

By the way, “Improperly used” and “misrepresented” are public realtions code words for lying and stealing.

If that wasn’t bad enough, the Kenya incident came right on the heels of a Sponsored Post Campaign for Google’s Chrome web browser, which so blatantly violated Google’s own guidelines against paid links, they had to manually penalize their own Chrome web page due to the violation.

So unless Google’s New Year’s resolution this year was to make major public relations gaffes, this certainly wasn’t the greatest way to start 2012.

But it gets worse.

In the days following the Kenya and Paid Link humiliation, Google launched their new “Search Plus Your World” search results to a very tepid, if not negative, response. The major problem is that these new results pull in data from Google+, Google’s new social network baby, often at the expense of more pertinent results from other sources and social media platforms, like Facebook and Twitter.

This obviously goes against the idea of providing searchers with the most pertinent results available…which if memory serves me, was what Google use to be known for and what originally made them kind of a big deal.

Which brings us back to the newly announced Privacy Policy. In a nutshell, this new policy will allow Google to monitor user behavior, habits and preferences across their network of products. So you know those videos you secretly watched late last night on YouTube? They’re the reason you were served Justin Bieber ads this morning with your coffee when you opened up Gmail.

One of the biggest concerns regarding this new privacy policy is that you can’t opt out of it. If you are going to be using Google products, then your information will be shared amongst them, like it or not.

Well, Congress for one doesn’t like it and has already asked the FTC to look into it.

So as we are still in the early stages of 2012, you’ve got to wonder, what the (bleep) is Google doing?

I realize as an SEO professional, I live in a Google bubble. We all do. We see what a first page organic listing can do for a client’s online sales; we know what a professionally managed Google Adwords campaign can mean to a bottom line. We also know that it is in the best interest of our clients and their SEO campaigns to have a Google+ page for their businesses, and offer visitors a way to +1 their web content.

We are also the ones you will find on Google+, sharing SEO content, articles, tips and insights (and in the case of Todd Mintz Fail Blog humor). But are we on Google+ because we want to be, or are we really on there because we have to be? 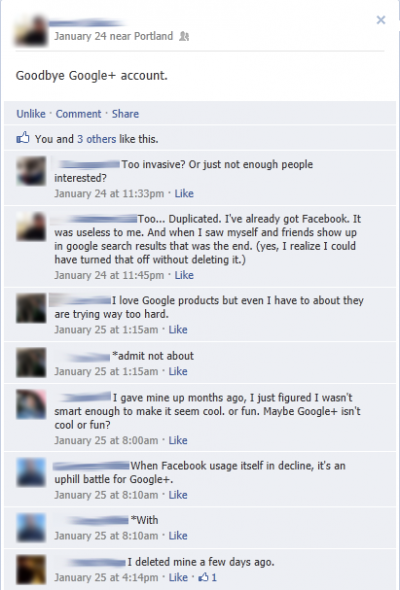 This is a sentiment I’ve seen repeatedly from Facebook friends.

Since Google’s announcement of their new privacy policy, I’ve already seen at least 5 of my non-industry friends on Facebook announce that they have deleted their Google+ accounts. Not that it will make much of a difference to me personally, because nearly 100% of the information I see on Google+ is from colleagues in the SEO industry.

I have wide range of non SEO industry friends, with a number of them being tech savvy, yet I find that none of them have embraced Google+ or are using it on a regular basis. While everyone initially flocked to set up an account during the exclusive invite only beta period, interest quickly diminished once it was available to everybody, and everybody realized it was just like Facebook, minus most of their friends.

Just this morning, I logged into Google+ and had to scroll through over 50 posts from SEO colleagues until I found one from a non-industry friend. So if these non SEO industry people aren’t using Google+, then just who is?

And this is what really speaks to the central problem at Google, which is its continued move away from its core focus of search. We’ve known for quite some time that Google has wanted a piece of the social media pie. They tried to acquire Facebook, but Microsoft was the company that ended up making an investment in them. They tried Google Buzz, which failed miserably.

Do One Thing Really Well - The #2 Core Principle of Google

And now they are back at it again, but this time they are forcing us to use Google+, at least if we want to have a leg up in their organic search results. And since that is part of our job descriptions, there really isn’t much of a choice, is there?

Rumor has it that Larry Page told Googlers that if they didn’t like “Search Plus Your World, then you should probably work somewhere else”. He could have just as easily told the SEO community, if you don’t want to get organic exposure on Google, you might as well use another social media platform.

The stiff armed tactics, the same type of megalomaniac maneuvers that led to the Kenyan debacle and the paid links scandal, are now being employed on the SEO community, as well as businesses in an effort to make Google+ a viable social media platform.

But ask yourself, if Google+ and +1’s had absolutely no bearing whatsoever on organic or paid listings, would you use them? I’m sure some of you would, but I’m also confident many of you wouldn’t.

And that’s the problem. It isn’t a choice. It’s a requirement.

Because as search marketing professionals, we are forced to incorporate Google+ strategies into our campaigns, to recommend Google+ to our clients and to interact with Google+ on a daily basis.

But what about the average Joe? I have serious doubt they have any intentions of leaving the familiar surroundings of Facebook where all of their friends are, or even Twitter, for the sterile confines of Google+. 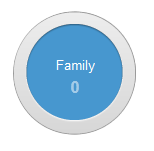 And while Google might be able to force our hand and the hands of businesses, they can’t do the same to the consumer, and ultimately that is where the battle will be won or lost. Because in the end, if they can’t convince my wife, my brothers, my neighbor or my son’s teacher to use their new social network, then they are headed for another disaster similar to Google Buzz.

Yet when you want to search for something you “Google” it…at least for now, which is something Google needs to remember if they hope to pull this year out of the drain and bounce back from an abysmal start to 2012.

Oh, and they might want to get back on board with that “do no evil” thing too. It probably wouldn’t hurt.