Google quietly rolled out a few updates to the AdWords Structured Snippets ad extension recently. These changes took the form of adding a new “Models” Header, removing the Black Friday and Cyber Monday options, and adding Languages to choose from. 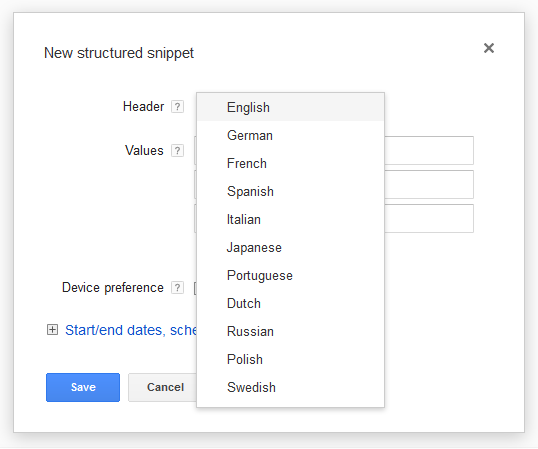 Since the original Headers did not have any for you to choose from, there was no way to run multiple Structured Snippets for different languages in the same market and have the correct one show to the searchers specific language. This new update is great for running campaigns for targeting multiple languages in the same geographic areas.

This will also help prevent this “type” (tipo or tipos in Spanish) of language mismatch from happening:

Structured Snippets had 12 original Headers and with the addition of the new Models we’ve got 13 well rounded options that will relate to most verticals. (okay, there were 2 others but more on that later)

Models also falls in line what I believe is the true intent of Structured Snippets to help qualify and associate common ad extension data for advertisers as well as for Google. We’re likely to start seeing the same Structured Snippet Header types showing for multiple ads on the same keyword searches as they become more widely used and Google starts to identify which ones are more relevant to specific queries. Currently there appears to be little rhyme or reason for the snippets that do show up on different ads on the same SERP.

AdWords even provides the examples of Corolla, Pruis, Yaris to demonstrate a common usage for Models in the form of Auto types.

Here is an example of what the Models look like live:

The Black Friday and Cyber Monday Structured Snippets have been removed from the list of available Headers and are not likely to return.

Here they were at the bottom of the list back in November:

AdWords first released these new Structured Snippets back in November 2015 just in time for the Thanksgiving (US) shopping season. These were special in the way that they only activated 7 days prior to their respective date and stopped running at midnight on the specific day.

These special holiday Snippets were probably more of a novelty for the AdWords ecosystem as Google likes to keep features that will be highly used over long periods of time and by many different advertisers. These were limited because they were only applicable to businesses offering promotions and would only run for one week a year.

Out with the Old, In with the New

For posterity here is a comparison of the original Headers look like along side the new one:

With these 3 recent changes, Google has now made more Structured Snippet updates than any other ad extension over the past 6 months. It’s safe to say that these are going to be a mainstay for quite some time. Now that there are 13 headers to choose, there is an option for just about every type of pay per click campaign.