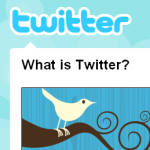 While Bing might be promoting itself as the decision engine, Twitter could make a play for being known as the “Freedom Engine”. According to an article previously posted in the Washington Times, the State Department last weekend asked Twitter to delay it scheduled maintenance this week, which would have cut daytime service to Iran on Tuesday, just as protests against the recent elections continue to gain momentum.

As Twitter provides the ability to provide up to the second information updates, and allows users to follow these posts through a real time search of the hashtag #iranelection, Twitter has emerged as the leading unofficial source for updates from Iran on the election. This is especially important source as the country has moved to block all other text messaging services and censor other forms of communication.

According to a senior official at the State Department, “”We highlighted to them that this was an important form of communication. One of the areas where people are able to get out the word is through Twitter. They announced they were going to shut down their system for maintenance and we asked them not to.”

Many Twitter users across the world have decided to change their account settings so that their profile location states they are from “Tehran” and that they are in the GMT + 3.30 time zone. This has been done in an effort to overwhelm the Iranian censors with people who look like they are posting subversive tweets from Iran, which will hopefully protect the actual Iranians who are doing so. Also, many tweeters world wide have added a green tint to their profile pictures in support of the protesters.

Regardless of your political beliefs, seeing Twitter become the go to source for a specific news event is a significant advancement for Social media and shows how these real time resources are being used to instantly connect people throughout the world.