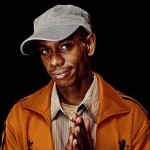 Anyone doubting the power and pull of social media needs look no further then the impromptu gathering last night / this morning at Portland’s Pioneer Courthouse Square, where through the power of Twitter and Facebook, a crowd of thousands showed up to hang out with the elusive and hilarious Dave Chappelle.

The city has been abuzz today as the Oregonian, local news stations and Portland based radio shows have been talking about this late night social gathering. The Oregonian even devoted the top header of their website to “Full Dave Chappelle Coverage”. And why not, as thousands of people converged at Pioneer Square based solely on a rumor, spread through text messages, word of mouth and tweets that Dave would be performing at midnight.

According to a somewhat shocked Chappelle, “This has never happened to me in my entire career” as he was evidently surprised by the large turnout, which lead him to say, “Don’t tell a secret in Portland”. According to various reports, Dave intended to do a small impromptu show for around 300 people and had only mentioned this to a few people he met during the day while exploring Portland. Little did he expect over 3000 fans to show up.

This turnout definitely speaks to the massive power of social media and more specifically Portland’s position as a top social networking community. Estimates place the crowd at somewhere between 3,000 to 6,000, with most of them being in their 20’s, with no arrests or citations being issued. Props go to everyone who turned out, the Portland Police for handling this crowd with class and Dave for keeping Portland weird.