Today is milestone day for Google AdWords as it turns 15. The little engine that could, definitely did. And in a big way as Google is the largest search engine and has one of the most powerful ad networks around. Google even created an Infographic to commemorate the occasion. You can scroll down to see it in it’s entirety.

We at WebRanking have been advertising on AdWords back even before it was AdWords. It’s original form was called Sprinks and it was known at the time as the ad platform that powered About.com ads. Google bought Sprinks it in 2003 and turned it into the original version of the AdWords self-advertising pay per click platform. Previous to that you could only advertise on Google by dealing directly with Google and they would build and run your paid search campaigns for you.

Original WebRanking AdWords Campaign from May 2002

WebRanking has been managing PPC campaigns on Google AdWords since 2002 with our first campaign going live on May 17th. I managed to find an original campaign that we ran back then and look at those $0.05 bids. Yes, that’s correct… 5 Cent clicks! Whoa have times changed! Oh, and don’t judge our keyword grouping in this ad group too harshly as it was over 13 years ago! 😉 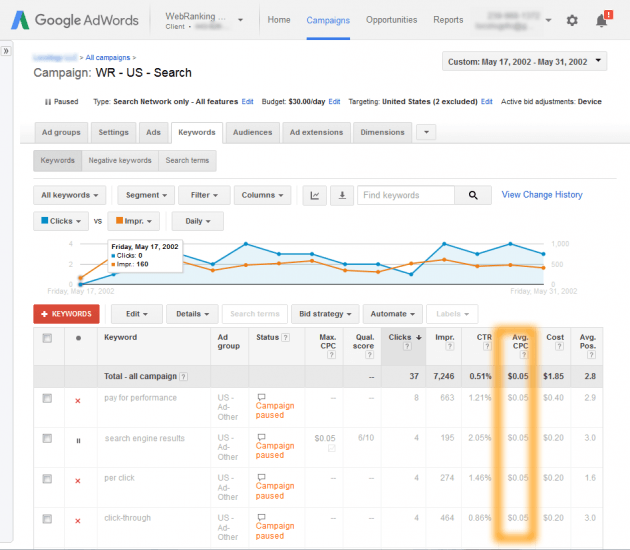 Original Google AdWords Campaign for WebRanking from May 2002

A lot has changed in the last 15 years. Check out Google’s infographic for some of the major highlights from the past decade and a half.

Happy birthday AdWords and cheers to another 15 more!