4 Father’s Day Tips for Being Successful in Social Media 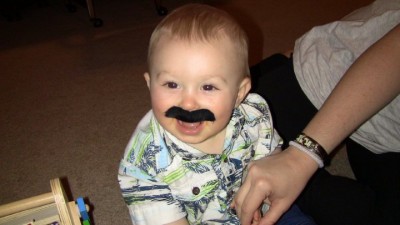 On September 13th 2009 Owen Matthew (a.k.a The Lil’ Dictator) was born and life as I knew it changed forever. You see I had become a father for the first time in my life and this momentous occasion spurred a huge change and maturation in me personally, forcing me to reprioritize my life, focus on my career and reduce the hours spent at the local brew pubs.

I’ve only been a Dad now for a little over 9 months, but through this crash course called parenthood I’ve managed to pick up some solid life lessons that are applicable not only to fatherhood, but also to my day job as a social media marketer (and addict). With Father’s Day right around the corner, I thought I’d share the 4 things that Fatherhood has taught me about being successful in Social Media.

1. Regardless of how hard you try, eventually you’re going to get pooped on.

Well, it might not be poop, but becoming a parent guarantees that at some stage you will be the unwilling recipient of some type of bodily fluid from your precious bundle of joy.

From the onset, I was convinced that I could be the exception to the rule. I used a pee-pee tepee religiously during diapers changes. Adhered to a strict no bouncing or airplane rides after meals policy. I even wore make shift hazmat suits for particularly challenging diaper blow outs.

It goes without saying that I was always careful to avoid the wrong end at the wrong times.

Yet despite all of the cautionary measures and all of the preventative actions…in the end, these precautions didn’t matter. One fateful bath night, as I was quickly maneuvering my son out of his clothes and into the tub, he got me.

And then he laughed. And I had to laugh too.

Social Media is much the same way.

Write good content, engage thoughtfully with other professionals and colleagues, and be conscientious about what you put out there and how you respond with others. You can do all of the things you’re suppose to do as a first-class social media participant…yet suddenly, out of the blue, somebody decides to use you as their online bathroom.

Maybe they take exception to the point you made on a recent blog, or feel you misused statistics in a post, or dislike the fact you tweeted about a personal subject, or just have an unexplainable loathing for you or your company. Whatever their reason, they will find you; they will leave a nasty comment on your blog or Facebook page, they will send you a scorching and mean spirited email, and because they have nothing better to do they will try to make your life miserable.

Maybe they’re trolls, maybe they didn’t get enough hugs growing up, or maybe they are just plain bullies looking for an online fight. Regardless, they’re out there and there isn’t a damn thing you can do about.

If you have any type of online following and engagement, you know exactly what I’m talking about. Eventually, these Internet no-gooders are going to find you.

And that’s just fine. It’s par for the course and if nothing else it means that your work is actually being read and is provoking an emotional response. So clean yourself off, take it with a grain of salt, move on, laugh about it and know that it was not your fault.

Eventually, we all get pooped on.

2. Everything you put out there is being absorbed

Kids are sponges. You might not think they are paying attention, but they are. They are preprogrammed to take in what’s happening around them, and file it away for future use and embarrassment to you.

Like that bad word you let slip multiple times while watching the ball game. Or that secret spot you hide your emergency pack of smokes for times of mental crisis. Or the stupid, yet totally necessary celebratory dance you’ve been doing for the past 10 years when your team makes the winning shot.

You think the little guy doesn’t notice as he is too busy playing with that annoying laughing Elmo toy with the high pitched giggle that shakes uncontrollably like its having an epileptic seizure (you know, the one Grandma and Grandpa bought as pay back for your childhood misbehaviors).

You probably think that your antics will go unnoticed.

That is until your innocent little spawn comes running into the room with a half eaten cigarette in his mouth, yelling “shit” at the top of his lungs while shaking his ass and pumping his fists in front of Mom and all of her friends all while doing a dance that seems a little too familiar.

Trust me, they are sponges.

Social Media needs to be treated as an attentive child that pretends that he is too busy playing with others to be paying attention to you.

You might not think anyone is listening to you, maybe you don’t have many followers, or the traffic to your blog is practically non existent. But believe me, people do read what you write, and they do listen to what you say. It might only be a few, but its enough.

While your influence might be minimal now, with hard work and creativity that could change over night. And everything you’ve said and written about in the past becomes instant fodder for your new generation of social media connections.

So the next time you’re thinking of posting something of a questionable nature online…remember, you’ve got a room full of hyperactive, attention seeking kids just waiting to see what you’ll do next.

3. There is no manual. Do what feels right for you.

Once we had brought my son home from the hospital, and the relatives had all gone home, I was sitting there quietly holding this precious little child in my arms, and suddenly realized that I had no idea what the hell I was doing.

As I sadly discovered, there is no owner’s manual that accompanies a new baby, and to my chagrin, they don’t come with an 18 year power train warranty.

I was fortunate to have two younger brothers growing up, so I was somewhat familiar with babies. I knew the basics of a diaper change and had general knowledge that shaking them is a no-no, that you should never push on that squishy spot on top of their heads and whiskey is no longer an approved method for helping them sleep through the night.

Other then that…well, I was pretty clueless.

There are tons of so called experts and “gurus” out there, modern day Dr. Spock’s who think they know what’s right for you and your social media “baby”. They have a multitude of lists on how often you should blog, what you should Tweet about, what type of information you should list on your Facebook page, and how to use each medium to find success.

But remember, this is your baby, not theirs. Granted there are certain things you should never do, but how you decide to manage and utilize your social media accounts is ultimately up to you.

Go with what feels right, with what is in line with the values of your organization, and with what you can commit to. It’s a lot like choosing how to discipline your child. We might not all agree on the best methods for doing so, but we can all agree that it is a necessity for raising a successful and well balanced kid.

4. Be patient, because in the end all of the hard work and nurturing will pay off.

Sleepless nights, the weight gain (yeah, it’s been 9 months and I’m still trying to get the sympathy pounds off), the countless number of dirty diapers. I think if most of us made a “pro vs. con” list about having a child, the cons could easily outnumber the pros. 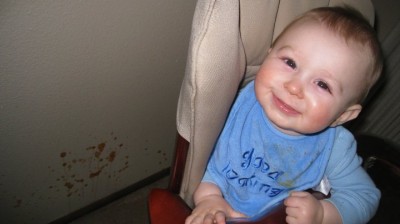 Redecorating the walls with Carrots

But you know what? All of the those forced trips to Babies R Us, all of the baby food splatters you’ve cleaned off of the walls, and all of the drool marks that have permanently taken up residence on your clothes…they’re quickly forgotten when you see the look of joy on your son’s face when you walk in the door at the end of a long day.

I would not trade hearing him laugh, watching him sleep or seeing his eyes light up at the discovery of something new for anything. It’s strange, but I never thought I would feel like this, yet somehow, someway, being a parent changes the way you think (could be due to sleep deprivation) and the value you place on some of the simpler things in life.

Creating a successful Social Media campaign, while maybe not comparable to the joys of parenthood, still provides great satisfaction in the end.

At the onset it may have taken many sleepless nights coming up with the right ideas, and even more stressful days trying to put your plans into action. You work your butt off, yet nobody seems to notice. You continue to write, to interact, to tweet, to like, and follow and engage…yet the returns are not there.

Then one day it happens. Comments on your blog begin to appear, you see a noticeable increase in activity on your Facebook page, more twitter followers, more likes, an increase in connections and more importantly you begin to meet the goals you set out to achieve at the start.

Suddenly, all of that hard work, all of those sleepless night are forgotten. You’re now the proud parent of a successful social media campaign.

A word of warning though…enjoy it while you can.

Because it’s inevitable, before too long your boss is going to start bugging you about adding another platform to your platonic family of social media networks. Because if one bundle of social media goodness is rewarding, then two are even better, right?

In closing, I’d like to say that the only reason I’ve managed to be an a-ok Dad so far is because of my own father, who through love, hard work and selflessness set the example on what it takes to be a fantastic father. So on a personal note; I’d like to take a moment to wish him, and all of the other Fathers out there a happy Father’s Day.