Facebook in the News – Adds Live Search and Acquires FriendFeed

Facebook was making a little news on Monday, as they launched a new search interface that allows members to view all posted results from the entire network of registered Facebook users, or just results from current Facebook friends. This new “Everyone” filter is very similar to Twitter’s search feature, as it allows you to monitor the entire Facebook network for information and updates on real time news and events. This feature was tremendously popular during the recent Iranian elections, as it allowed users to stay up to date when information from other, more traditional media outlets was scarce.

Below is an example of a recent search for current national hot topic “healthcare reform” using the new search application: 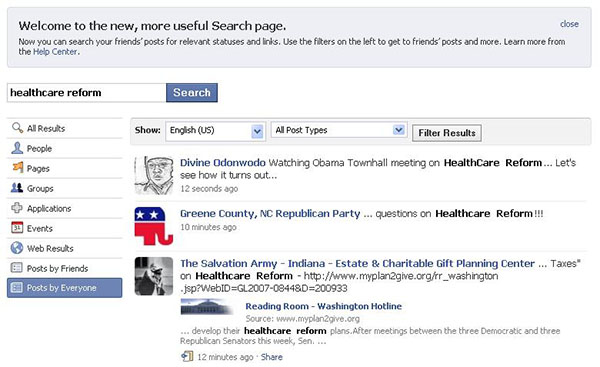 The search feed will update you as new posts become available, which is also similar to Twitter’s search. As Facebook’s network of over 250 million users dwarfs Twitter’s network, the potential of this search feature is tremendous. However, as Facebook is a more complex website, it will be interesting to see how many users become aware of this new feature and begin to utilize it.

In other Facebook news, it was announced on Monday that Facebook had acquired FriendFeed, a social network feed aggregation start up. Many industry insiders speculate this acquisition was for acquiring the talent at FriendFeed as much as it was for getting their hands on the FriendFeed product.