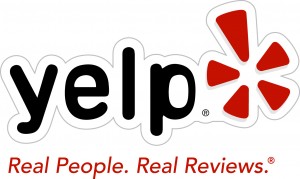 In this second part of the interview we look at why Yelp frowns on review solicitation, how they protect businesses from fraudulent reviews and the do’s and don’ts on interacting with customers who have posted negative reviews about your business.

Following is the second part of my three part interview with Luther:

CHRIS: One of the factors Google is using for determining who gets into their 7 pack is online reviews from various online resources.  Because of this, what we’ve seen at our agency is that a lot of businesses are now directly soliciting reviews from their customer base.  What’s Yelp’s take on this, on the solicitation of reviews, and is there a right way for businesses to ask for a review, or is that strictly tabu?

LUTHER: It’s a tough issue.  We discourage the solicitation of reviews.  In the late ‘90s there were a bunch of online review sites created by the Yellow Page companies. They basically attached a review widget to a phone book and said: “Ok, online review problem solved.” But it wasn’t. A small percentage of business owners started manufacturing fake reputations about their businesses – writing 5 stars about themselves and 1 stars about their competitors. You don’t have to have many people within a system misbehaving to compromise its authenticity, and many of these sites became spam space race instead of helpful guides for consumers. If consumers don’t use or trust it, what’s the point? Everyone loses.

So Yelp, when it was created in late ’04, set out to really tackle this problem in a smarter way.  There are two key things that make us different. Number one, we have a rich off-line community.  We have folks like Don B. based in Portland who are reinforcing in an off-line community that online behavior of sharing local knowledge.  But the second thing we do, and it definitely isn’t executed without creating controversy, is the filtering of reviews that, yes, are sometimes legitimate. Basically every day we have an algorithm going through ten million plus reviews saying, “How established is the user who wrote this review?” because users become more or less established over time, the quantity of reviews on business pages may fluctuate. They’re always going to appear on that user page, but it may not be featured on a business page on a particular day.

Find Us On Yelp Badge

It’s very tough to design algorithms that can tell the difference between the guy who’s cranking out a fake five-star review about himself, and the guy who’s flipped that laptop around and handed it to his customer and said, “Hey, write a five-star review about me.”  So, you know, I know that businesses are going to ask people to write reviews.  If you do that, you need to be prepared for pretty violent review fluctuation.

Honestly, the best thing you can do is focus on great customer service, and they’re going to aggregate great reviews naturally.  That said, there is a huge difference between saying, “Write a review about me,” on Yelp, and, “We are on Yelp.” or, “Check us out on Yelp.” You can even co-brand your presence with badges we offer on our Flickr page (requires you to be logged into Flickr), https://www.flickr.com/photos/yelp/sets/72157623054478330/detail/.

CHRIS: Okay.  That leads into my next question, which is, how does Yelp protect businesses from fraudulent and fake reviews?  And if a business owner suspects that some of the reviews are not legitimate or are from a competitor or a disgruntled ex-employee, what can they do to get those reviews removed?

LUTHER: Sure.  A lot of criticism about the review filter is oriented around the fact that a business owner is upset that some of their five-star reviews disappeared.  What I think a lot of times is forgotten in that criticism is that the same filter that is protecting consumers against a shady dentist who is willing to have his secretary crank out 20 fake five-star reviews, will also protect Car Mechanic A from having Car Mechanic B write fake 1-star reviews about him.  So the overwhelming majority of that malicious behavior is smoked out by our review filter.  Very, very rarely do you see a strange review that just sticks on a Yelp page that is from an established person in the community.  Now the good news is that businesses have an important voice on Yelp, and we want them to engage on the site.  All businesses — for free — can unlock the ability to respond to reviews.  They just simply go to biz.yelp.com, and it allows you to privately and publicly respond to reviews.  We recommend starting out with a private response first and saying, “Hey, I’m sorry you didn’t have a five-star experience.”  Very often they will go back and change that review based on the private response.  But, by all means, if there is some kind of factually incorrect piece of information living on your business page, it doesn’t hurt to post a public comment and say, “FYI, Molly says that we’re not open on Sundays, but you can see by our business hours above that we are open on Sundays.”

LUTHER: A right way for business owners to engage is unlock their free business tools by going to biz.Yelp.com.  A lot of great stuff that I hope we get to talk about is available there.  When you unlock your business tools, there are a lot of great tools that you can engage with, and using all those tools is a great way to do it.  Of course we have advertising products that are designed to increase the number of page views to your business page, and that stuff is available at yelp.com/business.  You can learn about some of the advertising SEM products we have there.  So that’s the right way to engage, is either just becoming a part of that business community and using the free tools.  The wrong way, I think is not employing common sense: flying off the handle to get to a customer in a public comment is the equivalent of screaming at a customer.  Let’s say you’re a restaurant owner and you’ve got a packed restaurant on a Sunday brunch, and one of your customers makes you mad.  You don’t scream at the top of your lungs into their face for all your customers to see, just like you don’t write in all caps a public comment response to somebody that’s written a bad review.  I see business owners that have actually done this.  And so, if you disagree with somebody, you still have to be diplomatic in response, because people are watching you.  And even if you do a private response, if you fly off the handle in a private response, that doesn’t stop them from copying and pasting it on a Talk thread and it really backfiring in a bad way.  Another big mistake some business owners make is aggressively soliciting reviews.  You don’t want to do that for two reasons.  Number one: (I’ve already mentioned) the review filter.  But number two, it just looks spammy and decreases the authenticity of your overall presence. That can turn the customers off to you.

CHRIS: Do you have any humorous or outrageous stories you can share of situations like this that come to mind?

LUTHER: One of my favorite stories from a business owner was about how he used Yelp as a research tool.  A highly competitive salon basically looked at the salon across the street’s reviews and asked, “What are they doing that’s causing them to get negative reviews and how can we optimize our business to make sure that we’re never doing that,” and then, you know, over-compensating.  And then, “What are they doing to get positive reviews and how can we incorporate that into our business practices?”  I think that there’s a lot of untapped potential.  I think businesses should absolutely consider it a research tool.  If you see a business that’s got a great reputation, study it and figure out what makes them great. Emulate it in your own business.

LUTHER: Of course there’s a lot of good creative criticism out there.  You know, if your reviews frequently show that your place is maybe not as clean as it should be or, you know, if there are frequent complaints about the professionalism of your receptionist or the cleanliness of your wait staff… One or two reviews, maybe that’s not necessarily the truth or the person had a bad day, but if you’re consistently seeing this, it’s a great way, in my opinion, for business owners to identify elements in their business that they can improve, and you’ll see those adjustments reflected in future reviews.  A lot of Yelpers will go back and review a business once again, and if they have a much better experience, will share that with the community.

CHRIS: If you get ten reviews that say your bread’s stale, your bread is definitely…

LUTHER: Your bread’s probably stale.  You need to work on your bread.

Don’t forget to check out the 1st and 3rd parts of Chris’ interview with Yelp’s Luther Lowe: